Recently Kim and I were talking and I asked if she wanted to take a more active role with this web blog.  She said; “Let me go home and pray about it.”  She did and so over the next three or four weeks she will be contributing on Friday Mornings along with the midweek devotional on Wednesday Morning.

I am thrilled, excited and very much looking forward to this series. 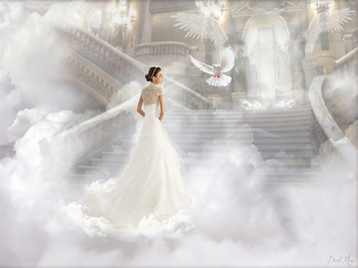 Ephesians 5:22-27, “Wives submit to your own husbands, as to the Lord. For the husband is head of the wife, as also Christ is head of the church; and He is the Savior of the body. Therefore, just as the church is subject to Christ, so let the wives be to their own husbands in everything. Husbands, love your wives, just as Christ also loved the church and gave Himself for her. That He might sanctify and cleanse her with the washing of water by the word. That He might present her to Himself, a glorious church, not having spot or wrinkle or any such thing, but that she should be holy and without blemish.”

I know what you are thinking, my, my, this women has opened up a big can of worms. I know right? But wait! Don’t click off just yet. I have been looking at the wedding symbolism of the ancient Jewish religion, and it has opened my eyes to this scripture and a lot more! I plan to share this with you weekly over the next 3 weeks or so and unpack a lot of really cool parallels to some frequently quoted scripture that has much deeper meaning!

It is a love story. Like every other one of God’s good gifts entrusted to the keeping of humanity, marriage has been perverted by sin; but it is the purpose of the gospel to restore its purity and beauty. In both the Old and the New Testament the marriage relation is employed to represent the tender and sacred union that exists between Christ and His people, the redeemed ones whom he has purchased at the cost of Calvary. MB 64

Marriage is at the heart of a family. The very first order that God gave Adam and Eve was that a man should leave his father and mother and cling to his wife, that the two should become one and that they should multiply. A family of three is the picture of the trinity, perfect love. A relationship of two, can be a very self-centered relationship. I give you what you want so that I get what I want. This is really not love for another but rather for ourselves. When the first child comes along, everything changes. The husband and wife work together for each other and for their offspring who relies on them for all of his wants and needs. It is other centered love. The baby cannot give you anything in return but love, and sometimes it’s a lot of work! Marriage is a picture of God’s love. No wonder the enemy has attacked marriage and the family.

Let’s take a look at the first step of marriage for the ancient Jews.

In our modern culture, we are accustomed to a man choosing a woman or a woman choosing a man for marriage, but in ancient Israel, families arranged marriage. II Corinthians 11:2 “For I am jealous for you with godly jealousy. For I have betrothed you to one husband, that I may present you as a chaste virgin to Christ. When the father saw that it was time for his son to marry, he sent a servant to another village to find a wife for him. Usually someone his son had never met. This servant went with the best offer his master could afford, and made an offer for her to enter into marriage. If the woman’s father was impressed and accepted the bridegroom’s offering, he called his daughter for her response, she could say yes or no, but most likely she would say yes, because the opportunities for her to get married and have family were few.

In my own life, God approached me through a servant who introduced me to Christ, and I had the opportunity to say yes or no. God does not force. He pursues us, he woos us.  John 6:44 “No one can come to Me unless the father who sent Me draws him; and I will raise him up at the last day.” John 17:24 “Father, I desire that they also whom you gave Me be with Me for you loved Me before the foundation of the world.” Romans 8:29-30; “For whom He foreknew, He also predestined to be conformed to the image of His Son, that He might be the firstborn among many brethren. Moreover, whom He predestined, these He also called, Whom He called, these He also justified; and whom He justified, these He also glorified. Ephesians 1:3-6.

If a woman refused the offer she could not expect ANY benefit from the groom. The “bride price” the price for a virgin was 200 denaris (100 shekels). Enough to purchase 3 slaves for up to 50 years. Until the year of jubilee. It demonstrates the value of finding a suitable bride. John 3:16; John 12:48; John 17:24 Jesus “paid the price” for us (his bride) because of his great love for us. I Corinthians 6:20 “For ye are bought with a price; therefore glorify God in your body, and in your spirit, which are God’s.”

(To be continued) Next week the Betrothal