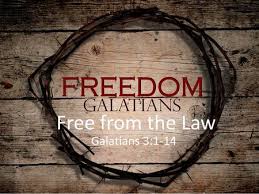 The apostle skillfully weaves his argument around each of those passages and comes up with what we might call the two ways to life. In the process, Paul seeks to drive his opponents into a corner from which there is no escape.

Here is Paul’s logic: to those who seek life by works, winning salvation through law-keeping is based on several premises. First you must stand by your decision. You cannot straddle the fence here. If you choose the way of the law, you will have to live by the law (Galatians 3:12). And not just part of it – you will have to “abide by all things written in the book of the law, and do them” (verse 10).

Now, that sounds like fun, doesn’t it? Basically, what Paul has just said, you will become slave to the law and since none of us can possibly keep all the law, what’s the point. No love here for I am working and working and working for my salvation which I can never achieve because I cannot possibly keep all of the law, all three laws (10 Commandments, Ceremonial, and the health-civil laws).

Paul reminds them that it is impossible to keep the law for no one has ever done it and certainly many have tried, all have failed. But, Paul doesn’t dwell on this point rather, he merely assumes it. But he does so on excellent Old Testament grounds. In Romans, he does develop the argument and has six quotes from the Jewish Bible that demonstrate that none have attained righteousness through the law (Romans 3:11-18). As Paul states in Romans 3:23, “All have sinned and fall short of the glory of God.” Paul further states that no one will be justified by law-keeping because the very purpose of the law is to point out sin rather than to save people from it (verse 20). Paul doesn’t argue the universality of failure to keep the law in Galatians 3, he doesn’t fear any contradiction, given its strong Old Testament Support.

This brings Paul to his third point: IF all have failed in observing the law, then all are under condemnation. After all, doesn’t Deuteronomy 27:26 teach that everyone who fails to keep everything that the law teaches is cursed? (See Galatians 3:10).

Oh, wow, then after having exhausted the keeping of the law, the law leads to being right with God logic, that Paul sets before the Judaizer’s thinking. Where did Paul get this? From Habakkuk 2:4, “The righteous will live by faith” (Galatians 3:11). Paul applied that passage to salvation from sin. In short, though it is impossible to gain righteousness through obedience, because it is impossible to be obedient, it then is possible to do so only by simple trust (faith) in God.

Just as the way of the law approach to getting right with God has an inherent chain of logic, so also does the way of faith approach. If point one in the chain of faith approach is that the righteous man shall live by faith (NASB), the second point in the logic chain is the question: “faith in what?” The apostle is more than happy to answer that question – it is nothing short of the gospel itself.

Substitutionary atonement was the very heart of the gospel. For Paul Jesus was truly “the Lamb of God, who takes away the sin of the world” (John 1:29). Jesus as the Lamb of God was to Paul the only valid object of the faith that makes men and women right with God. This is the Faith of Abraham and this is the faith all can grab hold of. That saving grace which is achieved only through faith is available for all, Jew, Gentile, Male, Female, without regard to social status or position.

Paul along with you and I should find the remedy to the curse and penalty of the broken law through the cross of Christ. “Christ redeemed us from the curse of the law, having become a curse for us” (Galatians 3:11; Galatians 2:16). Through faith in the crucified Christ all receive “the blessing of Abraham,” which includes not only being made right with God, but the promise of the Spirit (Galatians 3:14).

Why would we want to live any other way, then by grace through faith in Christ atoning sacrifice?

2 thoughts on “Galatians: Gospels in Conflict, Abraham’s Faith and What Christ Accomplished for All People, part 5c”