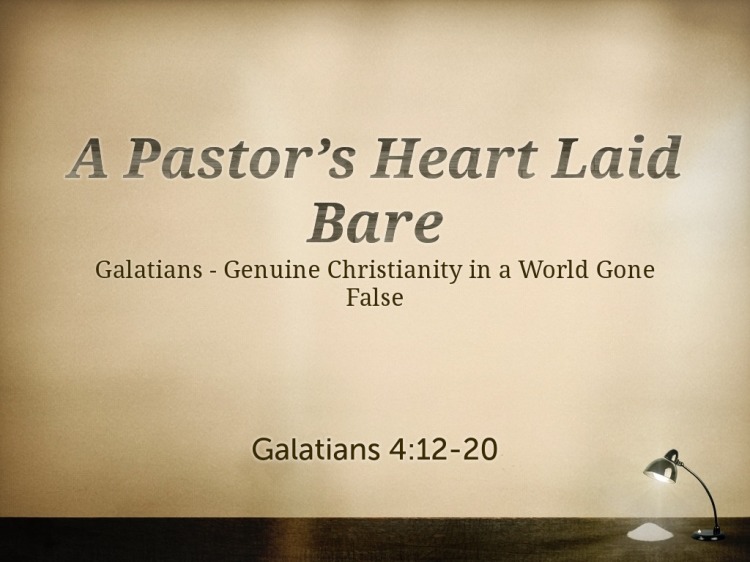 My dear children, for whom I am again in the pains of childbirth until Christ is formed in you, how I wish I could be with you now and change my tone, because I am perplexed about you! Galatians 4:19, 20 NIV

Throughout much of Galatians we have been hearing Paul the theologian speaking. He has rebuked Peter and spoken against the Judaizes, but only in theological terms. Now in Galatians 4:12-20 we meet Paul the pastor. Gone is much of the intellectual talk as Paul now makes an appeal to their heart. When speaking in theological terms, he referred to his reads as foolish and bewitched (Galatians 3:10 or even as traitors to the gospel (Galatians 1:6), but now Paul speaks as a pastor, calling them children. He pictures himself as a parent in Faith (Galatians 4:19) while previously it was Paul the apostle, theologian, the defender of the faith now Paul acts the part of a pastor. Yes, we see Paul the pastor, the passionate lover of souls.

Verse twelve starts by Paul begging them to become as he was because he had become like them. On the surface, Paul appears to be appealing only to the Galatians, but in Paul’s confrontation with Peter in Galatians 2:14, “If you, though a Jew, live like a Gentile and not like a Jew, how can you compel the Gentiles to live like Jews?”

So, how is it that Paul and Peter had become like gentiles? To begin with, they both had grasped the fact that their justification had come through faith rather than through works of the law (verse 16). As a result, they had given up ideas of gaining merit from circumcision or other aspects of the Jewish law. They were clear on that point. As Ronald Fung points out, “In exchanging adherence to the law of faith in Christ, Paul became a Gentile sinner, as the Galatians were.

Perhaps the revolving back door of the church would stop revolving if we as Christians relied on faith and not works. Then perhaps those newly joined by way of the front door would not fell so compelled to leave by way of the back door if they didn’t feel so pressured to live up to the letter of the law. Don’t get me wrong, for the life of all believers should change for the better daily as we gain a better understanding of God. This comes from encouragement from others and personal time spent in prayer and study of God’s word. When this approach is taken, then won cannot help but gain a better understand of God and how God is wanting us to become. But as Paul has always pointed out, “Faith” is the bases for all this.

Paul appealed to the Galatia church and to us to become as he himself has become, which is free from the legal bondage and to know the liberty that is in Christ (see Matthew 11:28-30). Beyond all this had come to realize that the legal ceremonialism of Judaism did not contribute to his standing before God. Paul is asking the Galatians and us to keep ourselves free from this bondage so that we can remain faithful to the fact that justification is a gift from God that can only be received through faith. This is what Paul is begging the Galatians and us to do in verse 12.

He could threaten but he could also plead in love when necessary. He was a pastor who above all things desired the salvation of his flock.

Beginning with the last part of verse 12 and up through verse 16 Paul sets forth the Galatian’s attitude toward him. “You did me no wrong.” Paul has no complaints reading how they treated him during his first missionary visit to Galatia.

Why would this be? Apparently, Paul had contracted some disgusting disease or condition that could easily have predisposed strangers to despise and reject both him and his message. It would sound to me that the Satan attempted to thwart the gospel message by afflicting Paul with this illness, but the gospel message that Paul preached to the Galatians was of such beauty that they gladly become Christians. Not only was this illness affecting his skin, but his voice as well, yet they listened to him as if he were an angel or even Christ Himself. So happy were they with Paul’s message they would have done anything to alleviate Paul’s suffering.

Some have concluded that the malady must have affected Paul’s eye sight. Others have conjectured that for some reason he never fully recovered from the blinding flash of the on the Damascus road (see Acts 9:3) – that God had allowed him to have an ongoing thorn in the flesh to keep him humble and always recognizing that he had been saved by grace (see II Corinthians 12:7-9). Others have taken the words in the closing section of the Galatian’s epistle (“see with what large letters I am writing to you with my own hand” [Galatians 6:11]) as additional evidence that Paul’s problem had to do with his eyes.

His problem of the flesh might have involved the eyes, but that is not altogether clear from the Bible itself. After all, the fact that the Galatians were willing to tear out their eyes for him may simply mean that they would have done anything for this man who had brought the gospel to them. And that is the essential point. We don’t need to know the exact nature of Paul’s illness to understand his meaning.   The point that he is making is that the Galatians accepted him and his gospel message without reservation. They received it with joy (Galatians 4:15)