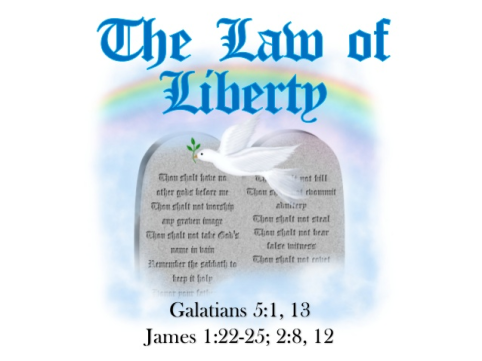 The Law of Liberty

James 1:25 – “But whoso looketh into the perfect law of liberty and continueth therein, he being not a forgetful hearer, but a doer of the work, this man shall be blessed in his deed.”

Some people don’t like the idea of God having a law, but this is usually because they misunderstand its nature and intent. The word “law” conjures up ideas of control, restriction, and arbitrary rules that run contrary to freedom and pleasure. But nothing could be farther from the truth.

Let me give you an example. There was a young girl who met her first love, and fell head over heels. He seemed to be the perfect match for her. He was kind, and courteous, loving and handsome! It wasn’t long until they were engaged and then married. They had a wonderful wedding and honeymoon. She was very happy. The morning after they had returned from their time away, her husband woke her up early, and kissed her good-bye and then gave her a list. She rubbed her eyes and tried to make sense of the list. She asked him what it was for. He smiled and said, it’s your schedule for the day. I will see you tonight. After he left, she realized that the list was a moment by moment account for her entire day. She was allowed two fifteen-minute breaks and a thirty minute lunch break. This began her life as she knew it, day after day, taking care of his every need. Ironing his clothes, shining his shoes, making his meals with precise timing so that when he came home she had changed her clothing, fixed her hair and applied lip stick and perfume so that she was attractive for him when he arrived. This went on day after day, year after year. She soon resented his lists, his schedules and eventually she resented him as well. Because she was forced to adhere to his law. One day out of the blue, she got a call that there had been a terrible accident and her husband had been killed. She was so used to the schedule that it was hard for her to adjust to thinking on her own again, but she went on with her life and eventually met another man and although skeptical got married again. This time she was awake early the day after the honeymoon, and to her surprise and joy there was no list. She was free to do whatever she wanted. She got up and took care of the chores, did his laundry, shined his shoes, made his meal, and prettied herself in preparation for his return. He was delighted of course with his new bride. He thanked her for her efforts and told her how much he appreciated all that she did for him. About a year later, she came across a tattered piece of paper in one of her pockets. It was a list. One of the daily lists that her first husband had written for her. She read it, and broke into tears. She realized that she was still doing everything on the list for her new husband, but she was doing it out of love for him. She wanted to make him happy. She didn’t resent him or resent her life at all.

Left to ourselves, no matter how hard we try, we find it impossible to live in harmony with God’s perfect law of love. We are bankrupt of moral power. We need something more than a self-help book, a religious practice, a meditation, or a boost of good old-fashioned willpower. We need a Savior. Christ is our only hope and we must ask Him to write His law in our hearts. “I delight to do Your will, O my God, and Your law is within my heart.” Psalm 40:8