Will Not Cast Off

Then I went down to the potter’s house, and there he was, making something at the wheel. And the vessel that he made of clay was marred in the hand of the potter; so he made it again into another vessel, as it seemed good to the potter to make. 6 O house of Israel, can I not do with you as this potter? Say the LORD “Looks, as the clay is in the potter’s hand, so are you in my hand O house of Israel. Jeremiah 18:4, 6

“Jeremiah did not get his flash of insight while he was praying, but while he was watching a potter engaged in his daily work,” wrote Charles E. Jefferson. “God reveals Himself in strange places and at unexpected seasons. For instance He once revealed Himself in a stable.” 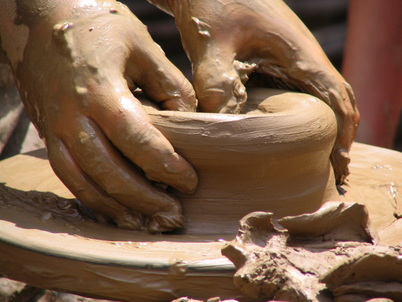 The potter sat before two parallel stone wheels that were joined by a shaft. He turned the bottom wheel with his feet and worked the clay on the top wheel as the wheel turned. As Jeremiah watched, he saw that the clay resisted the potter’s hand so that the vessel was ruined,[1] but the potter patiently kneaded the clay and made another vessel.

The interpretation of the image was national, relating to the house of Israel (vv. 6–10), but the application was individual (vv. 11–17), calling for a response from the people of Judah and Jerusalem. It also calls for a personal response from us today.

As the potter has power over the clay, so God has sovereign authority over the nations. This doesn’t mean that God is irresponsible and arbitrary in what He does, even though He is free to act as He pleases. His actions are always consistent with His nature, which is holy, just, wise, and loving. God doesn’t need any advice from us, nor do we have the right to criticize what He does. “For who has known the mind of the Lord? Or who has become His counselor?” (Rom. 11:34, NKJV, quoted from Isa. 40:13 and Jer. 23:18) “But indeed, O man, who are you to reply against God? Will the thing formed say to him who formed it, ‘Why have you made me like this?’ ” (Rom. 9:20, NKJV)

The Lord presented two scenarios that illustrated His sovereign power over nations (Jer. 18:7–10). If He threatened to judge a nation and that nation repented, then He would relent and not send the judgment. He did this with Nineveh when Jonah’s preaching brought the city to repentance (Jonah 3). On the other hand, if He promised to bless a nation, as He did Israel in His covenants, and that nation did evil in His sight, then He could withhold the blessing and send judgment instead. God neither changes in character nor needs to repent of His actions (Mal. 3:6; Num. 23:19), but He has the sovereign freedom to alter His actions depending on the responses of the people.

To be sure, there’s mystery involved in the relationship between divine sovereignty and human responsibility, but we don’t have to explain the will of God before we can obey it. We live by divine promises and precepts, not theological explanations, and God isn’t obligated to explain anything to us. (If He did, we probably wouldn’t be able to grasp it!) “The secret things belong to the Lord our God, but those things which are revealed belong to us and to our children forever, that we may do all the words of this Law” (Deut. 29:29, NKJV). Jesus promised that if we obey what we know, God will reveal more of His truth to us (John 7:17).

Nations are made up of individuals, and individuals have the ability to receive God’s Word or reject it. Yes, humans are made from the dust (Gen. 2:7) and live in a fragile body (Job 4:19; 10:9; 2 Cor. 4:7). Unlike the clay on the potter’s wheel, however, we have the ability to resist. God uses many different hands to mold our lives—parents, siblings, teachers, ministers, authors—and we can fight against them. But if we do, we’re fighting against God. Because God uses them and our circumstances to mold us until we reflect the character of Him who created us.

14For the LORD will not cast of His people, Nor will He forsake His inheritance. 15But judgment will return to righteousness, and all the upright in heart will follow it. Psalm 94:14, 15

[1] The word translated “marred” is also used for the ruined girdle in Jeremiah 13:7 and 9. It means “to destroy or corrupt.”