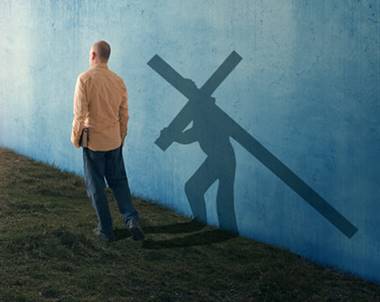 “When He had called the people to Himself, with His disciples also, He said to them, ‘Whoever desires to come after Me, let him deny himself, and take up his cross, and follow Me.’”

There couldn’t be a more offensive thing Jesus could say to the crowd, and His disciples than to tell them to, “Take up their cross and follow Me.”

To the Jews, the cross was repulsive, it was a symbol of Roman Tyranny. Invented by the Assyrians, and perfected by the Romans it brought about a slow and tortuous death in which those being crucified typically suffocated. It was a humiliating death because people were typically hung on the cross, their bodies naked for all to gaze upon. When the time for execution came, those that were to be hung would be commanded to take up their cross and carry it to the site of execution. We will see this when Jesus himself was commanded to carry His cross through the streets of Jerusalem to the site of execution on Golgotha.

So, why would Jesus ask his disciples and followers to do something so offensive? Jesus had already begun to tell His disciples of His coming death, so was he saying that they, as in all, would also be subject to the humiliating death of dying on the cross. Oh, it is true, some would, but what was Jesus trying to say?

Let’s look at the words of Jesus a little closer. “Whoever desires, to come after Me, (wishes to follow Jesus) let him deny himself, and take up his cross and follow Me. 35 For whoever desires to save his life will lose it, but whoever loses his life for My sake and the gospel’s will save it.”

And, what is this statement about denying himself or herself all about? Does this mean I am earning my salvation? I thought salvation was a free gift, but this almost makes it sound like I have to earn it, is that true? And one more things, what is this about saving life and loosing life?

Let’s see if we can unpack this.

In order for this to make sense, we need to go back to the beginning. In heaven before Adam and Eve sinned, a covenant was agreed upon by God the Father and Jesus. The covenant was thus: “Should mankind fail and fall to sin, then Jesus as creator of this world, would give up his divinity, becoming one like sinful mankind.” This included being tempted and tried in all points as we to are tempted. Living as you and I live, but with one very distinctive difference in that although Jesus took on humanity, became one like us, he was yet Devine in nature. Yet in order for the plan of salvation to work, Jesus had to become one like us, which included giving up His position in heaven and although he retained his Divinity, he could not use it in anyway for himself. In essence Christ had to deny His Divinity, His own self, taking upon himself humanity which eventually led Him to Calvary and dying upon the cross.

He took up the cross of humanity when he set aside his Divinity.

I hope that makes sense and in it one half of the picture in the plan of salvation is complete, for now comes the tricky part. Jesus said, to those that were listening: “Let him deny himself, and take up his cross, and follow Me.” The key being the word deny, and we could also add the word himself.

Remember just a moment ago we talked about Jesus having to deny or give up his divinity, and now Jesus is saying that mankind has something it must give up, and it is coupled with the word “himself.” Jesus is saying we need to “deny self.”

So, what is Jesus saying when he says “deny himself?” As Christ gave up his divinity not being able to use it to glorify himself, but only to bring cheer and comfort to others, so should the Christian, who has decided to follow Jesus give up his humanity (selfish desires), in that he should not use his selfish desires to glorify himself. As Christ took upon Himself humanity, we must put on Christ’s Divinity, not that we can become God, but we can put on the character or characteristics of God when we lay our selfish desires upon our cross.

It certainly is not an easy road to travel, many have tried it, with few succeeding. But this is what Jesus is saying in verse thirty-five, “For whoever desires to save his life will lose it, but whoever loses his life for My sake and the gospel’s will have it.” When we decide to continue to live our life the same as we did before, being ruled by our selfish desires, then the chance at eternal life with Christ is ruined. But when we lay down our human characteristics and cling to Christ, allowing him into our lives through the power of the Holy Spirit, then our lives will begin to reflect the character of Christ and we can then be partakers of his promise for everlasting life with Him. But it is by loosing our life in Christ and embracing the gospel message that we gain life.

36 “For what will it profit a man if he gains the whole world, and loses his own soul? 37 Or what will a man give in exchange for his soul?

These two texts are virtually self-explanatory, in that we apply what we have learned above, then when we desire the things of this world and desire them to the point that they take ahold of our life, dimming our desire to follow Jesus, then we will not profit by our association with Jesus. In fact over time, these wonderful principles that we have learned about Jesus and the Good News of the Gospel will begin to pail in comparison to the things of this earth. Jesus is telling each of us that there is really nothing that we can give in exchange of our own soul, save giving up of self, and all our selfish desires.

“For whoever is ashamed of Me and My words in this adulterous and sinful generation, of him the Son of Man also will be ashamed when He comes in the glory of His Father with the holy angels.”

If the people of Christ’s day were adulterous and a sinful generation, how much more must we as a people be today. Yet Jesus is searching, longing to find and spend time with a people that are not ashamed to be called Christian, who are willing no matter the cost, the possible humiliation, or no-matter the stigma of being a Christian can be, will grasp hold upon Jesus, giving up of self and their own personal sinful desires for a life with Christ. For all those that are ashamed of Christ in this life, Christ will in no wise open the Kingdom of Heaven to them in the great day of the LORD when he comes in clouds of glory. Therefore, is there anything in this world that is to precious, to near and dear that we are unwilling to give it up today, for life everlasting with our Lord and Saviour.

As Joshua the mighty worrier for God said, “As for me and my house, we will serve the Lord” Joshua 24:15b. Joshua asked the people to put away their evil tendencies and their foreign gods and to serve the LORD and as Jesus talked with the disciples and His followers, he once again asked all those about Him and all of us to do the same thing. Choose you this day whom you will serve. Christ lay down His divinity taking up our humanity that we might be reconciled to Him. Christ is asking us to put down our humanity, then to put on the character of God, so that we might be reconciled to God through our Saviour Jesus Christ our LORD.

And He said to them, “Assuredly, I say to you that there are some standing here who will not taste death till they see the kingdom of God present with power.”

Jesus is referring to the fact that soon after His death and resurrection, the people would see the manifested the power of the Holy Spirit, that would cause lives to be changed as they allowed the Kingdom of God to be set up in their hearts. Which all began on the Day of Pentecost, but for the moment, this was lost upon the disciples and the followers of Jesus. It had been much to take in, and it left the disciples fearful for the future and wondering how all this would come about.

NOTE: With this post we have come to the half way point in the book of Mark. Next week is Thanksgiving week, and I was thinking of not posting anything during thanksgiving but have since prayed about it and have decided for the week of Thanksgiving that all posts will have a thanksgiving theme. Not sure yet what this will look like but God will lead and direct. We will pick up the series on Mark again, on the 27th of November.