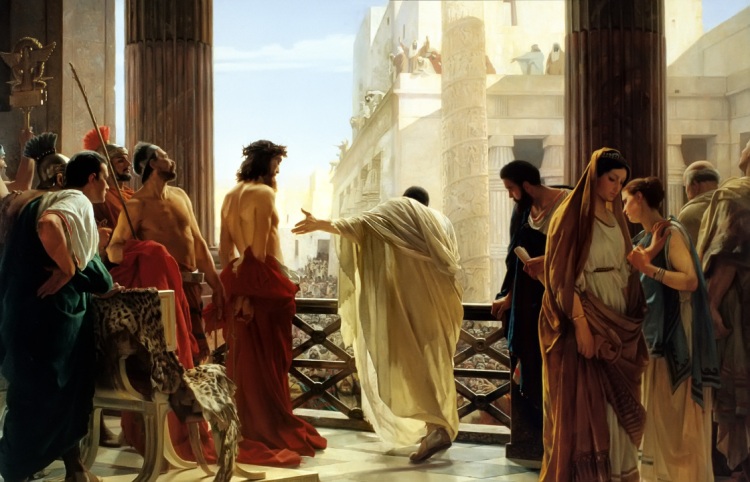 Before Pilate and Barabbas

Immediately, in the morning, the chief priests and held a consolation with the elders and scribes and the whole council; and they bound Jesus, and led Him away, and delivered him to Pilate.

As we discovered in an earlier post, Levitical Law forbid trials to take place under the cover of darkness. All must be done in the light of day, so that all may see the proceedings and to dispel any thought of something having been done sneaky or underhanded. Thus far Jesus had been tried first at Ananias’s house the former High Priest and then At Caiaphas’ but both of these proceedings had been done under the cover of darkness and so any conclusion or charges that were brought against Jesus could not be ruled on or charged with until daylight.

The time of the year of course was the Passover which would take place in late March or early April of our present calendar. This year on April 1, which is Easter Sunday the sun would rise at 6:27 AM and set at 6:58 pm in Jerusalem. There is another aspect of this that needs to be examined as well. The first watch started at 6 am and lasted for three hours with nine o’clock being known as the third hour. Mark as we will see makes good use of putting together a timeline to help us better understand the sequence of events and the time needed to carry out the crucifixion.

Why is this important to know? Because it had taken the religious leaders nearly six hours to settle on a reason for Christ to be crucified, at least a reason that would be acceptable to the Romans, since the Jews had no civil authority to execute anyone. It is only by the religious leaders linking forces with the civil authority that Jesus could be condemned and crucified.

There are actual two trials before Pilate with a trip to see King Herod in between. But, Mark does not report on the trial before Herod who would not rule and sent Jesus back to Pilate.

Dr. Luke the historian brings out the fact that it was at this point the Pilate turned Jesus over to Herod to condemn (Luke 23:6-12).   Once again, Jesus was mocked and treated with contempt and then Herod sent Jesus back to Pilate.

All this serves as background so that what is about to take place makes sense and that we can fully understand the object lesson that is presented before us by Mark.

6 Now at the feast he was accustomed to releasing one prisoner to them, whomever they requested. 7 and there was one named Barabbas, who was chained with his fellow rebels; they had committed murder in the rebellion.

Amnesty for political prisoners at festival time was a practice of pagan origin. It was a demonstration of the conciliatory policy of Rome toward the people of subdued provinces and was designed to win their favor. Pilot was accustomed to releasing a prisoner at this time and so brought it before the mob that stood before him. The most notable and notorious of the political prisoners that Pilate had at his disposal was Barabbas, who was the principle leader of the three that had been arrested just a few weeks earlier after an attempted insurrection against the government of Rome. This had taken place right in Jerusalem and as Jesus had walked up the steps into the temple, he no doubt walked over or around the blood stains that were still visible on the temple steps from this insurrection. By the way, both Roman soldiers and Jews had been killed. Barabbas and his two companions were due to be executed this morning by means of crucifixion.

Pilate reasoned with himself and came to the following conclusion. I have examined the prisoner (Jesus) and could find no fault with Him so I sent Him to Herod, who also found no fault, but sent Him back to me. I have examined Him and still am unable to find reason for any charges brought against Him. Therefore, I will offer the worst possible prisoner exchange, Barabbas for Jesus and with all the problems that Barabbas has caused, surely cooler heads will prevail, and I will release Jesus and still be able to crucify Barabbas.

Because of the recent revolt, Pilate found himself on a Roman hot-seat and he knew he had to do the right thing, or his political aspirations would be for naught. So, he believed he had come up with the perfect plan to save face before Rome and also the Jewish people and all could go away happy.

8 Then the multitude, crying aloud began to ask him to do just as he had always done for them. 9 But Pilate answered them, saying, “Do you want me to release to you the King of the Jews?” 10 For he knew that the chief priests had handed Him over because of envy. 11 But the chief priests stirred up the crowd, so that he should rather release Barabbas to them. 12 Pilate answered and said to them again, “What then do you want me to do with Him whom you call the King of the Jews?” 13 So they cried out again, “Crucify Him!”

Barabbas who was the leader of the insurrection against the government was sentenced to die. For rebelling against the government, he was sentenced to die. Does this sound familiar to us? It should. In Heaven, Lucifer (Satan) rebelled against Christ and God, wanting to usurp their power and place himself upon the throne of God. He wanted to rule the universe. For this he was removed from heaven and cast down to this earth. Upon this newly formed earth lived Adam and Eve who were citizens in the kingdom of heaven. Created in the very likeness of God Himself. Created just a little lower than the angels but given a great gift that the angels of heaven do not have, and that is the ability to procreate. To fill the earth with more people who would also be created in the likeness of God and be part of God’s Kingdom.

But Satan (Lucifer) was not willing to let this happen, and so tempted Eve and then through Eve, Adam, and they rebelled against the Kingdom of God. Genesis 2:15 – 17 tell us, “Then the LORD God took man and put him in the garden of Eden to tend and keep it. And the LORD God commanded the man, saying, “Of every three of the garden you may freely eat: But of the tree of knowledge of good and evil you shall not eat, for in the day that you eat of it you shall surely die.”

When Eve and then Adam chose to rebel against the government of God, they sealed their fate and that fate was they would one day die and be forever separated from God, and that separation would be permanent. But God had already made plans that should such a rebellion occur, that God would send His Son to die that death of total separation from the Father that mankind may one day be restored to the kingdom of heaven. So on that morning upon the sixth day of the week, as the people shouted out “Crucify Him, Crucify Him,” Barabbas was released and Jesus became the substitute for all those that have revolted against the kingdom of God.

But Satan was not yet done with Jesus, up to his point the cruel treatment that Jesus received was nothing compared to what was coming. Satan desired to keep Jesus from the cross and so unleashed every imaginable humiliation and torture upon Jesus he could muster in an attempt to get him to either use His power to save himself, or to bow before Satan and ask that this all stop. But, Jesus remained strong even though God the Father was separating himself from His Son, Jesus remained committed to what he was sent out to do. He came to be our substitute. We all who have participated in the rebellion against the government of God and as such deserve permanent death and separation from God, but Christ came to be our substitute, to suffer and die the death we deserve so that we might be restored to the Kingdom of God.

15 So Pilate, wanting to gratify the crowd, released Barabbas to them; and he delivered Jesus, after he had scourged Him, to be crucified.

20 And when they had mocked Him, they took the purple off Him, and put His own clothes on Him, and led Him out to crucify Him.

4 thoughts on “Before Pilate and Barabbas”