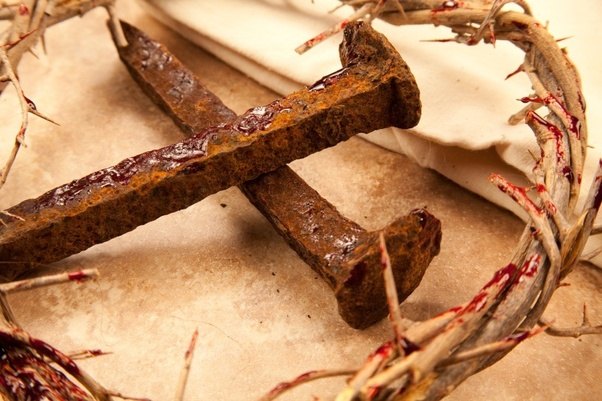 Psalms 22 starts with these words, “My God My God, why have You forsaken Me? Why are You so far from helping me, and from the words of My groaning? O my God, I cry in the daytime, but you do not hear: and in the night season, and am not silent (Psalm 22:1, 2).

33 Now when the sixth hour had come, there was darkness over the whole land until the ninth hour. 34 and at the ninth hour Jesus cried out with a loud voice, saying, “Eloe, Eloe, Lama Sabachthani?” which is translated My God, My God why have You forsaken Me? 35 Some of those who stood by, when they heard that, said, “Look, He is calling for Elijah! 36 Then someone ran and filled a sponge full of sour wine, put it on a reed, and offered it to Him to drink, saying, “Let Him alone; let us see if Elijah will come to take Him down.”

Shortly after 9 am, the third hour according to Jewish reckoning of time, Jesus was hung upon the cross. This followed a night of whippings, beatings, and humiliation. A trial done under the cover of darkness. Two trials before Pilate and one before Herod. Pilate considered Jesus an innocent man, yet ordered Jesus be whipped as a common criminal and then to be crucified. Hung between two common criminals and on a cross that was meant for another, Jesus had spent three agonizing hours suspended from the ground, considered an act of being accursed of God.

Now as the sixth hour approached the whole area became dark, dark as if the sun were setting. Although Christ felt rejected by His Heavenly Father, His Father did not reject Him. God caused a great darkness to fall upon the earth and shrouded within the darkness was God the Father. But because of the great weight of sin that Jesus bear, He could not sense the nearness of his Father and so Jesus cried out with great agony, “My God, My God, why have You forsaken Me?” Many believe that Jesus repeated the 22nd Psalm which foretells the death of Christ. In fact, Psalm 22 is the crucifixion Psalm, Psalm 23 is the death Psalm while Psalm 24 is the ascension Psalm. All three Psalms combine together to form a prediction of Christ’s experience of his death, rest within the grave and then ascension from the grave.

For the next three hours this crippling darkness rested upon the earth, causing great anxiety among some, yet others continued to mock Jesus as he hung naked, bruise, beaten and whipped upon the cross. Heavy was the load of sin that he bore as he hung suspended in air by the cross.

When Adam and Eve first sinned, the Pre-incarnate Christ had come down from heaven. He came to reassure our first parents that all was not lost. There was a plan in place that rescue mankind from sin. So a promise was given to Adam and Eve that through them one would be born that would take away the sins of the earth (Genesis 3:15). At that time, Christ attempted to teach them of this plan of salvation and so he showed them how to sacrifice a year-old lamb without blemish. It was not that the sacrifice would cause their sins to be forgiven, but that it pointed to the One that would sacrifice of Himself for the remission of their sins and all man-kinds sins. Genesis chapter 4 shows us the contrast of character between those who accept by faith this atoning sacrifice and those that do not.   Adam, Abel, Noah, Abraham, Isaac, Jacob and finally the children of Israel had been taught this object lesson, in the sacrificed lamb represented Christ who would come and sacrifice of Himself for all mankind.

There was no saving atonement in sacrificing a lamb, but it pointed to the one whose sacrifice would take away our sins. It was by faith that Adam, Abel, Noah, Abraham Isaac, Jacob and then all of Israel accepted this saving grace, offered not on our merits but on Christ’s merits alone.

Since the law had been given to Moses the Morning and Evening sacrifices had been performed. Each morning at the third hour (9 am) the morning sacrifice would take place. The same time in which Jesus was placed upon the cross. And each afternoon at the 9th hour (3 pm) the evening sacrifice would take place. The other gospels make a clearer statement of this, but Mark leaves sufficient evidence that at precisely the 9th hour, 37 “Jesus cried out with a loud voice and breathed his last.”

When Isaac was being sacrificed by Abraham, there came a voice that at the last second stopped Abraham and at that point a Ram was spotted and that Ram became the substitute for Isaac. That event had taken place upon mount Moriah which is the temple mount in Jerusalem. Now upon the death of Jesus, another miracle took place. Let’s read it in Mark 15:38, 39. Then the veil of the temple was torn in two from top to bottom. So when the centurion, who stood opposite Him, saw that He cried out like this and breathed his last, he said, “Truly this Man was the Son of God!”

Matthew makes mention that at the same time there was a terrible earthquake. But let’s go back to just a moment to the evening sacrifice. For centuries, the Priests had been sacrificing at the 3rd hour and again at the 9th hour. Yet as Jesus cried out and said, “It is finished” note what happened in the temple. “Then the veil of the temple was torn in two from top to bottom.”

Separating the holy place from the most holy place was this thick curtain that stood 16 feet tall and reached from end to end of the opening between the two compartments. In the court yard as the high priest raised his knife to slit the throat of an innocent lamb, Christ cried out, it is finished, breathed His last, a great earthquake took place and the knife in the hand of the priest fell to the temple floor and the lamb to be slain for the evening sacrifice got away, because the Lamb of the world had given of His life as a substitute for the lamb. As the Ram was a substitute for Isaac, Christ was the substitute for the lamb. Isaac’s Ram and the Lamb both represented Christ. Isaac’s ram representing our substitute which is Christ, and Christ fulfilling the need for animal sacrifices by actually being sacrifice in our stead.

No more would there be a need for daily sacrifices for Christ came to fulfill the obligation of the law, that through Christ, all sin would be forgiven, laid to rest. Those that accepted this act of grace by faith would then have their sins forgiven. And the gift, this free gift of grace is freely offered to all, Jew and Gentile alike.

No more would there be a veil of separation between God and man for God had torn down the separation and freely given to all who accept His atoning sacrifice access to the throne of Grace.

Here at the cross, who recognized what had taken place? A pagan Roman Centurion having heard and seen all that took place upon Cavalry’s hill declared Jesus to truly be the Son of God. For centuries, God had sent prophets and finally his own son looking for fruit from the vinedressers, (the children of Israel) but none was found among the vinedressers. They beat and killed the prophets and finally they killed the very Son of God, but there was in the heart of the pagan Roman Centurion the seeds of fruit that began to grow.

The crowd at the cross grew silent, something had just happened, but most failed to understand. Yet there were also women looking on from afar, among whom were Mary Magdalene, and Mary the mother of James the Less and of Joses, and Salome, who also followed Him and ministered to Him when he was in Galilee, and many other women who came up with Him to Jerusalem.

For the disciples and the faithful remnant of those that followed Jesus, I cannot imagine the grief they must have felt and the fear for the future that was within their hearts.

Jesus, the Messiah, the hope of all their national dreams hung dead upon the cross. Their hopes of returning as a great nation died with Jesus. Is there anyone who truly understood Jesus’ Mission?