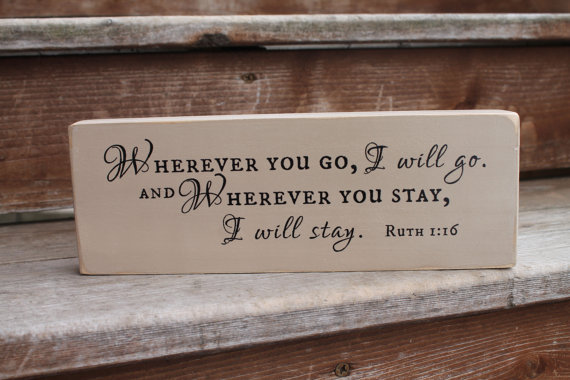 “Wherever You Go, I will Go”

And Ruth said, “Entreat me not to leave you, or to turn back from following after you; for wherever you lodge, I will lodge; Your people shall be my people, and your God, my God. Ruth 1:16

“Wherever you go, I will go.” At the time of the Titanic disaster in the North Atlantic Ocean a supreme effort was made to get the women and children into the lifeboats for the Titanic was going down. But Mrs. Isidor Straus refused to go into the life-boat. She turned to her devoted husband and said, “where you go I will go.” And went down with the ship, clinging to her husband. The words of this morning scripture are carved at the base of the monument to the pioneers of the old Oregon Trail. What courage it took for those pioneers of the Old Oregon Trail. What courage it took for those pioneer mothers to go into the unknown West with their husbands, clutching the hands of their little ones. They too had the spirit of Ruth and could say, “Whither thou Goest, I will go.” This quality of constancy is a beautiful characteristic. Disraeli, the eminent Prime Minister of the British Empire during the reign of Queen Victoria, said that the secret of success is constancy of purpose, Addiison went ever further and stated; “without constancy there is neither love, friendship, nor virtue in the world.” Shakespeare cried out: “O heaven! Were man but constant, he were perfect.” No wonder that Ruth’s constancy endeared her to the heart of God.

“They people shall be my people, and they God my God” As a result of this decision Ruth, the Moabite maiden, became the mother of Obed the Father of Jesse, the Father of King David. Her name holds an honored place in the genealogy of Jesus in Matthew 1.

The record says that “Orpah kissed her mother in law; but Ruth clung unto her.” One kissed and one clung. True love draws others to and they in turn cling to it. “Many waters cannot quench love, neither can the floods drown it; if a man would give all the wealth of his house for love, it would utterly be utterly despised” (Song of Solomon 8:7). Ture love cannot be purchased with money, and no adversity can drown it. Ruth had real love.