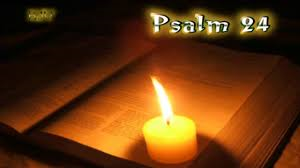 David the Psalmist penned three psalms and it is on these three prophecies in the form of psalms I would like to turn our attention to.

Some believe that as Christ hung upon the cross he repeated much of our first Psalm when he cried out “My God My God why hast thou forsaken me” (Matthew 27:46; Mark 15:34 see Psalm 22:1).  What is apparent is that David penned in prophecy what would happen to Christ on the day of his crucifixion.

Psalm 23 is a psalm of prophecy regarding Christ’s time in the tomb which brings us to Psalm twenty-four, the Ascension Psalm.  There is a tie-in between Psalms chapter twenty-four with Revelation chapter four and five along with Revelation 19:13-16.  So, let’s look at this Psalm and I have chosen to use the Old King James Version, still my favorite version of the Bible.

1 The Earth is the LORD’S, and the fullness thereof; the world, and they that dwell therein.

3 Who shall ascend into the hill of the LORD? Or who shall stand in His holy place?

4 He that hath clean hands, and a pure heart; who hath not lifted up His soul unto vanity, nor sworn deceitfully.

5 He shall receive the blessing from the LORD and righteousness from the God of His salvation.

6 This is the generation of them that seek him, that seek thy face, O Jacob. Selah.

7 Lift up your heads, O ye gates; and be ye lift up, ye everlasting doors; and the King of glory shall come in.

8 Who is this king of glory?  The LORD strong and mighty, the LORD mighty in battle.

9 Lift up your heads, O ye gates; even lift them up, ye everlasting doors; and the King of glory shall come in.

Let’s very quickly unpack these 10 verses.  Verses 1, 2 establish that whoever is being talked about is the one who founded, or better described as created the earth.

Verse three asks the question, who shall ascend into the hill of the LORD?  Who is able to stand before the very presence of God the Father, and verse four answers this.  “He that has clean hands, and a pure heart; who hath not lifted up his soul unto vanity, nor sworn deceitfully.”  Who is the only sinless person to ever live?  But of course, it is Jesus Christ who is also the creator of this world.

The creator of this world who lived a perfect life, shall receive the blessing from the LORD, and righteousness from the God of his salvation.

Verse six says this should be desire of all of Israel descendants to seek Him that lived this sinless life and to seek the face of God the Father, to reflect the character of Christ so perfectly that like Christ who reflected the chapter of God the Father, we to will reflect His character.

Verse seven rings out with a mighty shout, “Lift up your heads, O ye gates; and be ye lift up, ye everlasting doors; and the King of glory shall come in.  Christ has now been resurrected, the payment for sin has been made in his death and burial and now upon His resurrection all heaven opens Its doors.  Not only the door of heaven itself, but the doors of the heavenly Sanctuary, the very throne room of God is opened for Christ the strong and mighty the LORD who is mighty in battle for he has defeated sin and by his resurrection he has defeated death.

The heavens echo and reechoes with the rhetorical question, “Who is the King of Glory?” The Answer that all knew, “The LORD strong and mighty, the Lord mighty in battle.”  “Lift up your heads, O Ye gates; even lift them up, ye everlasting doors; and the King of glory shall come in.”  Again the question echoes throughout all heaven, “Who is this King of Glory?”  The Answer rings forth, “The LORD of hosts, he is the King of glory.  Selah or Amen and the Psalm is repeated two more times.

Christ lived a sinless life, died that we might gain everlasting life, was buried in the earth, and rose again, victorious over death and in this Psalm of David which is a prophecy of Christ’s resurrection and ascension, Christ is being welcomed home to sit at the right hand of our Heavenly Father, a place of honor because Jesus was, mighty in battle and victorious over sin and death that we might gain everlasting life.

Because God, so loved the world, that He gave His only Begotten Son, that whosoever believes in Him should not perish, but have everlasting life.  This is the promise given, Christ’s death, burial and resurrection is the fulfillment of that promise and so let us this Easter rejoice evermore and Thank God for his wonderful Goodness. Let it echo and reecho across the earth, Christ is risen and we serve a risen Saviour. Amen and Amen.