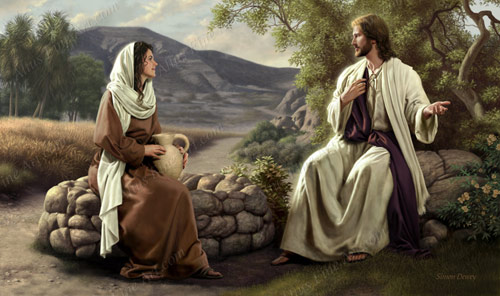 4 But He needed to go through Samaria. 5 so He came to a city of Samaria which is called Sychar near the plot of ground that Jacob gave to his son Joseph. 6 Now Jacob’s well was there. Jesus therefore, being wearied from His journey, sat thus by the well, it was about the sixth hour. 7 A woman of Samaria came to draw water. Jesus said to her, “Give Me a drink.” 8 For His disciples had gone away into the city to buy food. 9 Then the woman of Samaria said to Him, “How is it that You, being a Jew, ask a drink of me, a Samaritan woman? For the Jews have no dealing with Samaritans.” 10 Jesus answered and said to Her, “IF you knew the gift of God, and who it is who says to you, ‘Give me a drink,’ you would have asked Him, and He would have given you living water.”

When Jacob had dug this well he was a stranger in the land. Therefore, Jacob may not have realized that there are many natural springs in the area. This would have made it quite unnecessary for Jacob to dig this well. He could have dug this well in an attempt to avoid an argument over water rights. But then, perhaps it was by God’s direction that he dug this well so that it could used by Christ as an object lesson.

The well is situated about a ten-minute walk down from the modern city of Askar on the road to Jerusalem. No site connected with the life of Jesus is more certainly identified than this well, which still provides water for a monastery garden that lies at the foot of Mount Gerizim.

There is a good chance that Jesus and his disciples had been on the road since dawn and have traveled by foot 15 or 20 miles. What I find interesting is that John often mentions the emotions and physical limitation of Jesus as a man among men. John seems to go out of his way to show us that Jesus did not rely upon his Divinity to see him through, instead, he like us was limited by his human physical limitations. Jesus never performed a miracle to satisfy His personal needs or to alleviate His own physical pangs of thirst of hunger.

Next to the well, there is a curved curbstone wall upon which Jesus sat. He was tired from His journey and he along with His disciples were hungry, so He sat and waited while the disciples went to purchase food in the city.

I have heard many preachers upon telling this story say that this woman had a bad reputation. They base this upon the fact that she came to the well in the middle of the day, instead of early in the morning as the other women would. The second reason is based upon the discussion that takes place later in this section, where Jesus said to her, “For you have had five husbands, and the one whom you have is not your husband.” But I do not believe this to be the case, for if she had such a poor reputation, she would not have gone back to the city and had the people of the city follower her to back to the well to learn of Jesus. But we are getting ahead of ourselves and the story.

It was because the Holy Spirit had set up a Devine appointment for her with Jesus that she came to the well that mid-day. Deep within her own thoughts, she was startled by the words of Jesus, “Give Me a drink.”

This must have been something for her to hear, considering the Jews had no dealing with the Samarians and so she answered by saying as much, “How is it that You being a Jew, ask a drink from me, a Samaritan, and not only am I a Samaritan, I am a woman.”

In most cultures of that time, it was considered improper for a man to address or talk with a woman. This was all the more surprising considering she was Samarian and that Jesus would ask of her even in his thirsty condition for a drink of water from the well that Jacob had dug.

The process of winning the woman of Samaria to Christ deserves the most careful study on the part of all who set out to win others to Christ. We will explore this in our next post.

One thought on “At Jacob’s Well”