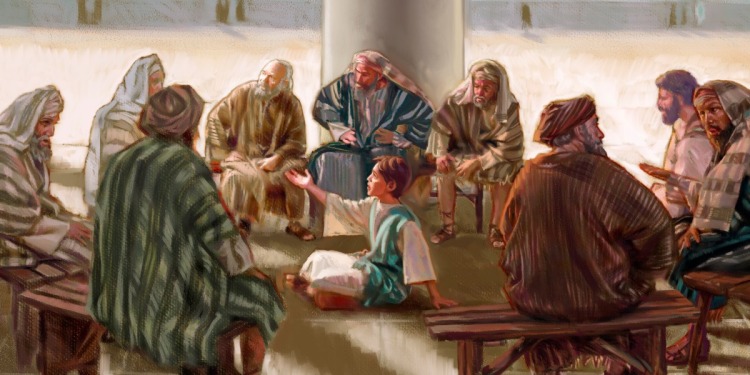 The Spirit in Christ from Youth

And when he was twelve years old, they went up to Jerusalem after the custom of the feast. Luke 2:42.

At the age of 12 the Holy Spirit was abiding upon Jesus, and He felt something of the burden of the mission for which He had come to our world. His soul was stirred into action. As one who would learn, He asked questions of no ordinary character, by which He flashed light into the minds of His hearers, and brought them to an understanding of the prophecies and the true mission and work of the Messiah they were expecting.
The Jewish people were cherishing erroneous ideas. They were anticipating grand and wonderful things, hoping for their own personal exaltation above the nations of the earth at the Messiah’s appearing. They were looking for the glory that will attend the second coming of Christ, and overlooking the humiliation that would attend His first advent.

But Jesus, in His questions about the prophecies of Isaiah that pointed to His first appearing, flashed light into the minds of those who were willing to receive the truth. He Himself had given these prophecies before His incarnation in humanity, and as the Holy Spirit brought these things to His mind, and impressed Him with regard to the great work that He was to accomplish, He imparted light and knowledge to those around Him.

Though He increased in knowledge, and the grace of God was upon Him, yet He did not become lifted up in pride, or feel that He was above doing the most humble toil. He took His share of the burden, together with His father, mother, and brethren….Though His wisdom had astonished the doctors, yet He meekly subjected Himself to His human guardians, bore His part in the family burdens, and worked with His own hands as any toiler would work. It is stated of Jesus that (as He advanced in years) He “increased in wisdom and stature, and in favor with God and man.”

The knowledge He was daily obtaining of His wonderful mission did not disqualify Him for performing the most humble duties. He cheerfully took up the work that devolves upon youth who dwell in humble households pressed by poverty. He understood the temptations of children; for He bore their sorrows and trials. Firm and steadfast was His purpose to do the right. Though enticed to evil, He refused to depart in a single instance from the strictest truth and rectitude. He maintained perfect filial obedience; but His spotless life aroused the envy and jealousy of His brethren. His childhood and youth were anything but smooth and joyous. His brethren did not believe on Him, and were annoyed because He did not in all things act as they did, and become one of them in the practice of evil. In His home life He was cheerful, but never boisterous. He ever maintained the attitude of a learner. He took great delight in nature, and God was His teacher