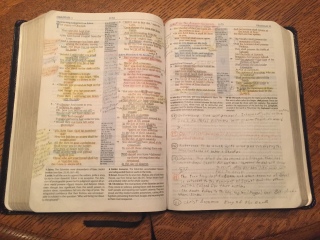 NOTE: This is the fourth post on Obadiah and some of you may be saying: “What is going on?  There has been no talk or insight into the book of Obadiah!”  I understand where you are coming from and realize that to be the case, but thought it important to explore the family history that was the backdrop for what happened with regards to Obadiah’s prophecy for Edom.  After this post we will be into the book of Obadiah with a couple of detours into the teaching of Christ that help us better grasp what is happening in Obadiah.  So, please hang in there, for there are good things coming.

Family reunions are not always happy occasions. When Christmas or Thanksgiving roll around many dread the time spent with family because of feelings of inferiority, distrust, envy and even hatred.

Jacob was a very rich man, having two wives and between his two wives and their handmaids, he had 11 children. God had truly blessed him while living with his uncle Laban.

Esau was also a rich man having several wives and many children. Yet, within Esau hatred still burned hot. Jacob sent a message to his brother saying “Speak thus to my lord Esau, ‘Thus your servant Jacob says: “I have dwelt with Laban and stayed there until now. I have oxen, donkeys, flocks, and male and female servants; and I have sent to tell my lord that I may find favor in your sight”’” (see Genesis 32:4b, 5).

Jacob’s servant returned not with new of a welcome home celebration but with new of a still angry brother: “We came to your brother Esau and he also is coming to meet you, and four hundred men are with him” (Genesis 32:6b). Jacob was fearful and so sent presents to Esau, hoping to find favor with his brother. The list of presents is extensive and can be found in Genesis 32:13-15.

That night Jacob wrestled with God and would not let God go until he had been blessed. “In the morning, Jacob lifted his eyes and looked, and there Esau was coming and with him were four hundred men. So he divided the children among Leah, Rachel, and the two maid-servants” (Genesis 33:10).

“Then he cross over before them and bowed himself to the ground seven times, until he came near to his brother. But Esau ran to meet him, and embraced him, and feel on his neck and kissed him, and they wept” (Genesis 33:3, 4).

It was a very happy reunion and the two brothers left on peaceful terms. “Esau to the mountain of Seir and Jacob to Succoth and built himself a house and made booths for his livestock” (Genesis 33:17).

When Israel was on their way to the promised land, they asked for permission to pass through the land of Seir, but their request was denied. It is unclear when the relations between Jacob’s descendants (Israel), and the Edomites deteriorated for that has been lost to history. But what it is clear in the book of Numbers (see Numbers 20:14-21) that it had.

This brings us to Obadiah and his prophecy against Edom, which we will begin to explore in our next post.